Nerd Humor: English - The torture of the conqueror 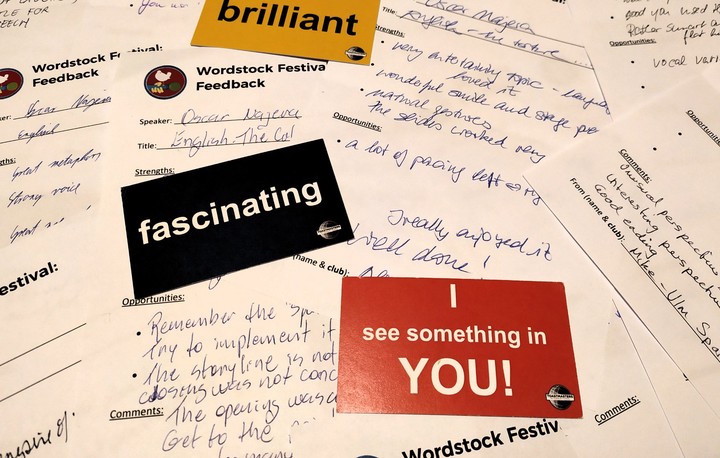 On November 16th 2019, I held a short humorous speech at the Wordstock festival in Nuremberg-Germany. I never imagined getting this far, and now I only see it as the beginning. In humor and comedy, I have always been on the spectator side. However, this year I chose to develop myself in public speaking and it indeed has been a long way. It all started as a personal challenge. I began by signing up in my public speaking club Isar-Speak.

Over the year I held some speeches and managed to spark some laughter in my fellow club members. When my club officers advertised the Wordstock festival, I was curious to go there. When they told me about be humorous speeches, I thought it would be fun. When they invited us to give a humorous speech, I didn’t think I could do it. My first reaction was fear and avoidance. However, advertising continued in my club and at some point it does get into your head. They convinced me and I signed up to try to test my humor. To ensure the quality of humorous speeches at the event a selection procedure was of course in place. I had zero expectations on getting anywhere beyond the first attempt.

I did not even want to move forward in the selection process, a nerdy topic should be handicap enough. Thus, I decided to talk about the pain of learning English. That is what many comedians do. They find something they can complain about, and rant on it. English is quite relatable. We need to learn it in this globalized world, and once we do, we forget how hard and inconsistent it is. Bringing this inconsistencies back to your attention should be funny.

The first time I tried the speech. I barely got any laughter out of it. However, I was the best in a crowd of one. No one else in my club found enough time to write a speech on their own. Thus, I was now the club champion and would continue in the qualifying process. Now, I was responsible for making my speech better.

For my second round, I actually had competition other club champions where there. I wasn’t the most loved on that evening, what a relief. Nevertheless, the funniest one was busy and would not be able to go to Wordstock to share his humor. I was the most average one among the humorist. In a crowd of 3 persons that placed me second and thus I was the next one given the option to continue. Oh, more responsibility! It is beginner’s luck, it has gone to far! I already qualified for the Festival. This is a serious deal now. Could I rewrite my speech for a third time. Sure!

I was invited to practice again in my club and test my third draft. It had improved indeed. Despite the familiar content, they laughed more this time. How can this be? 3 rounds and it starts to feel like good and fun content? What is the golden secret to improve? FEEDBACK! Every time I shared my speech, laughter might have been scarce. But I always received comments about it, some good other bad, but all friendly. I had more information to go over the speech once again.

The video that follows is the fourth version of my speech, as presented at the Wordstock event. I am amazed how far I have come. Yet, I was still nervous on that day. I made a mistake right at the start mixing English and Spanish, now fixed on the video. It certainly confused my audience a lot right from the start. I still lack awareness of what I say. I didn’t realize my mistake until I watched the Video. The speech was quite fluid. I received quite some laughter from the audience.

The event was a show case without winners and rankings. Nevertheless, there was gold for everyone. The true gold: Feedback from the audience. Lots of written comments and congratulation cards. That is what you see on the picture heading this post.

I’m re-posting this entry in my steemit blog.

comments powered by Disqus
Next
How To Escape Poverty? - Is Your Thinking Keeping You Poor?
Previous
Me as of today